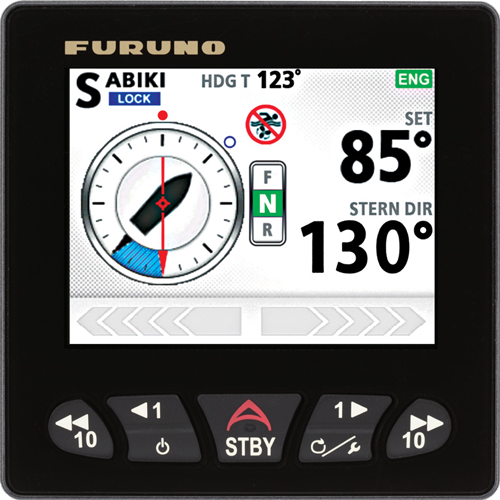 With Speed Control, the boat will run at a preset speed, adjusting engine RPM as needed to account for changes in wind and tide to maintain a constant speed. There is no need to adjust the throttle to maintain a consistent speed when trolling or navigating. Speed Control also helps increase the accuracy of ETA (Estimated Time of Arrival) information.

The Route Smoothing™ feature decreases the speed of turns as the boat approaches waypoints while navigating an active route. If the boat speed is too fast when approaching a turn, the boat can overshoot the waypoint, resulting in an undesirable deviation from the route. Route Smoothing™ remedies this by reducing the speed before executing the turn, helping to keep the vessel on course, and minimizing fuel consumption lost to errors.

The Point Lock™ feature maintains a fixed boat position by controlling the rudder and throttle, countering the effects of wind and current which are constantly working to move the boat. Point Lock™ is an invaluable tool for anglers while fishing a wreck or reef and for any boater desiring accurate, hands-free position control. Point Lock™ is also ideal for boaters who occasionally have to wait for a bridge to open so they can pass.

The new SABIKI™ Lock is designed for fishermen and takes advantage of the SABIKI™ fishing mode available with the NavPilot 300 Autopilot. With Furuno’s SABIKI™ mode, the helm is steered automatically by the NavPilot to maintain vessel position while the angler needs only to adjust the throttle to maintain a fixed position. FishHunter™ Drive's new SABIKI™ Lock expands upon this functionality by controlling both the rudder and throttle to maintain vessel heading, freeing the angler to focus 100% on jigging and other vertical fishing.

These new FishHunter™ Drive features are in addition to Furuno’s conventional FishHunter™ modes, which offer unique navigation features for fishing, regardless of engine type. For example, when you find a school of fish with a Fish Finder or a flock of birds with your Radar, it’s simple to drop a point on that target, send it to the NavPilot, and engage FishHunter™ to maneuver in an orbit, spiral, figure-eight, or zigzag pattern around the target. Suzuki’s new FishHunter™ Drive modes enhance the utility of Furuno’s FishHunter™ in terms of precise maneuvering and speed control.

FishHunter™ Drive features are available in combination with the Furuno NavPilot 300 and specific SUZUKI outboards outfitted with both hydraulic steering and Dometic Optimus Electronics steering systems, including the DF140BG, DF115BG, DF150AP, DF175AP, DF200AP, DF250AP, DF300AP, DF300B, DF325A, and DF350A outboards. FishHunter™ Drive supports configurations of up to 4 engines. Many of these new features can be selected and controlled directly from an interfaced MFD (Multi Function Display), such as the flagship NavNet TZtouch2/TZtouch3 or the GP1871F/1971F combination Chart Plotter/Fish Finder units. FishHunter™ Drive features are also available in the Suzuki SMD7/9 and SMD12/16 MFDs.

Furuno USA is a wholly-owned subsidiary of Furuno Electric Company of Nishinomiya, Japan. With two offices in the USA, a subsidiary company in Panama, and hundreds of dealers and resellers, Furuno USA is the exclusive distributor and service center for Furuno products throughout the Americas.