Furuno dominated the 2021 NMEA Awards with an overwhelming 7 wins, including the highly coveted Technology Award! It's been 50 years since Furuno won their first NMEA award in 1971, and in that time, Furuno's outstanding products have brought home an impressive 242 Awards.

Camas, WA - Furuno dominated the awards at the 2021 NMEA Conference by winning 7 NMEA Product of Excellence Awards, continuing their long-running streak of taking home more accolades than any other manufacturer! It's been 50 years since Furuno won their first NMEA award in 1971, and in that time, Furuno's outstanding products have brought home an impressive 242 Awards. The 2021 NMEA Conference brought together marine electronics professionals from around the nation for a week of learning and engagement, and participating NMEA members comprise the voting body for these annual awards. 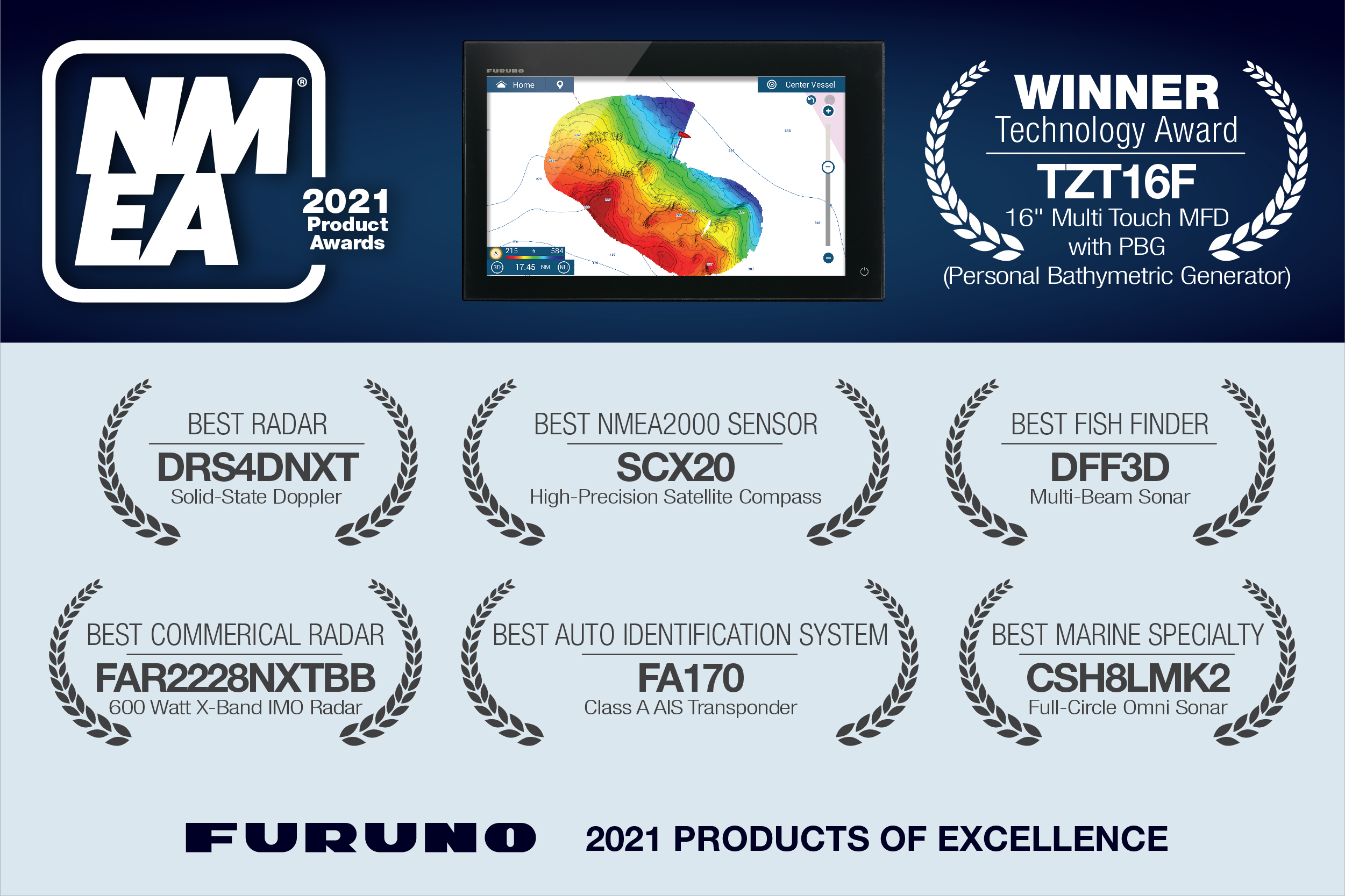 The prestigious NMEA Technology Award is awarded to the marine electronics product judged best in innovation, benefit to boaters, practicality, and value. Unlike the other categories, a specially selected panel of industry experts chooses the winner of the NMEA Technology Award. This year, the judges selected the NavNet TZtouch3 TZT16F with PBG (Personal Bathymetric Generator) as the standout product of the year, beating out nine other candidates for this distinctive honor. PBG allows boaters to create their own shaded relief maps of the seafloor, drawn with depth contours and variable colors that make it easy to identify hidden structure and ridges that hold fish.

"The enhanced MFD sports innovative new functions, including the Personal Bathymetric Generator, which when linked to Furuno's multi-beam sonar, can quickly create custom high-resolution shaded relief maps of the seafloor," the judges said. "Another new feature called Fish-It/Drift-It allows fishermen to locate the correct spot to begin their drift to put them over a fishing waypoint and then create range rings and course line on the display, saving time and fuel."

Furuno's ground-breaking DFF3D continues to wow the sportfishing community, winning the highly-coveted Product of Excellence award for Fish Finder for the fifth consecutive year. The DFF3D takes fish finding to new depths and angles, with a 120-degree view from port to starboard. With new PBG functionality, boaters can create their own shaded relief bathymetric charts wherever they travel.

In the Radar category, Furuno's DRS4DNXT once again took home the top honor. The DRS4DNXT is a Solid-State Doppler Radar in a compact 24" radome, featuring innovative Furuno technologies such as Target Analyzer™, Fast Target Tracking, and RezBoost Beam Sharpening.

The SCX20 Satellite Compass was recognized once again as the top dog in the category for best NMEA2000 Sensor. The unique four-antenna design of the SCX20 makes this amazing Satellite Compass capable of calculating precise heading, pitch, roll, and heave information, even when line of sight is limited to only a single satellite.

In the Commercial category, Furuno's FAR2228NXTBB Radar brought home the Product of Excellence award. This 600 Watt Solid-State IMO Radar is the culmination of Furuno's decades of innovation, showcasing Furuno features such as Automatic Clutter Elimination (ACE), Fast Target Tracking, and a familiar but completely fresh user interface. The Radar also includes a refined antenna and gearbox.

Furuno's CSH8LMK2 Full-Circle Scanning Sonar took top honors in the Marine Speciality category. This mid-frequency Sonar detects fish schools and individual fish, displaying fish distribution and seabed conditions in 16 colors, 360 degrees around the vessel. Its narrow beamwidth and enhanced target identification capabilities make it ideal for searching near the vessel or in shallow waters. NMEA members agree the CSH8LMK2 is a perfect solution for midwater trawlers, purse seiners, and sportfishing battlewagons alike, making it a game-changer on the tournament circuit.

Completing their streak of victories, the FA170 Class A AIS Transponder with 4.3" Color LCD Display took home the Product of Excellence - AIS award. This versatile unit has multiple ports to output reliable AIS data to all of the ship's navigation systems.

Beyond setting standards for electronic interfaces, communication protocols, and functionality for navigation equipment, the mission of the NMEA is to contribute to the development and popularization of the marine electronics industry. NMEA membership is reserved for dealers, distributors, industry experts, and NMEA-approved technicians, who vote for the products they feel should win these awards. Furuno's undisputed leadership in NMEA Award wins is an ongoing testament to their reputation for excellence and reliability among marine professionals and recreational boaters worldwide.

For complete details on these award-winning Furuno models, as well as their entire line of quality marine electronics, see your Furuno dealer, or visit them on the web at www.FurunoUSA.com.