The first of six new YT-808 tugs, outfitted with a sophisticated package of Furuno Marine Electronics, has been successfully launched by Dakota Creek Industries (DCI), demonstrating Furuno's commitment to providing the very best tools for the US Navy.

Camas, WA - The first of the US Navy's new YT-808 tugs, successfully launched by Dakota Creek Industries (DCI), is outfitted with a sophisticated package of Furuno Marine Electronics. YT-808 is designed after the existing YT-802 Valiant-class tug, and will be replacing aging vessels commissioned nearly half a century ago. 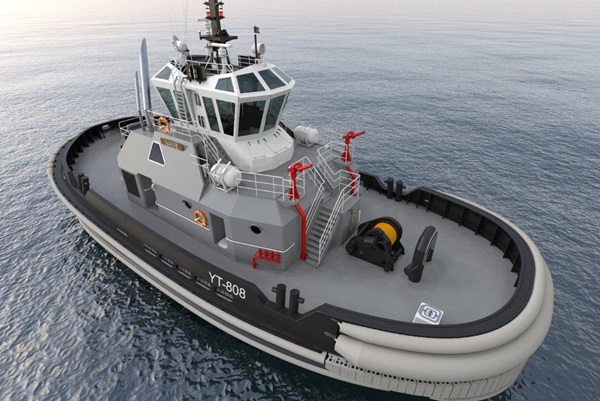 Designed by Robert Allan Ltd., YT-808 has a length of 90 feet and a 38-foot beam, with a maximum navigational draft of 16.5 feet. Her CAT 3512E main engines give her a free-running speed of up to 12 knots, and Schottel 1012 Z-Drives allow for rapid changes in thrust and vessel direction, ensuring the utmost in maneuverability and control. An articulating hydraulic brow installed aft of the deckhouse will allow for easy personnel transfers to and from other ships or submarines. Acceptance trials are expected in July 2020 with plans for an August delivery, with the remaining five vessels scheduled to be completed by early 2022.