Furuno has harnessed the power and sensitivity of their FAR22x8 and FAR3000 Radars to provide real-time monitoring and analysis of sea surface waves.

Camas, WA - Furuno has harnessed the power and sensitivity of their FAR22x8 and FAR3000 Radars to provide real-time monitoring and analysis of sea surface waves. Furuno's WV100 Wave Analyzer PC software works with their new X-Band and S-Band Radars and can display wave data on both the Radar screen and a PC display. Knowing wave height, direction, and period is critical for guaranteeing the security of crew and cargo in heavy seas, providing the most efficient navigation, and easily managing port traffic safely. 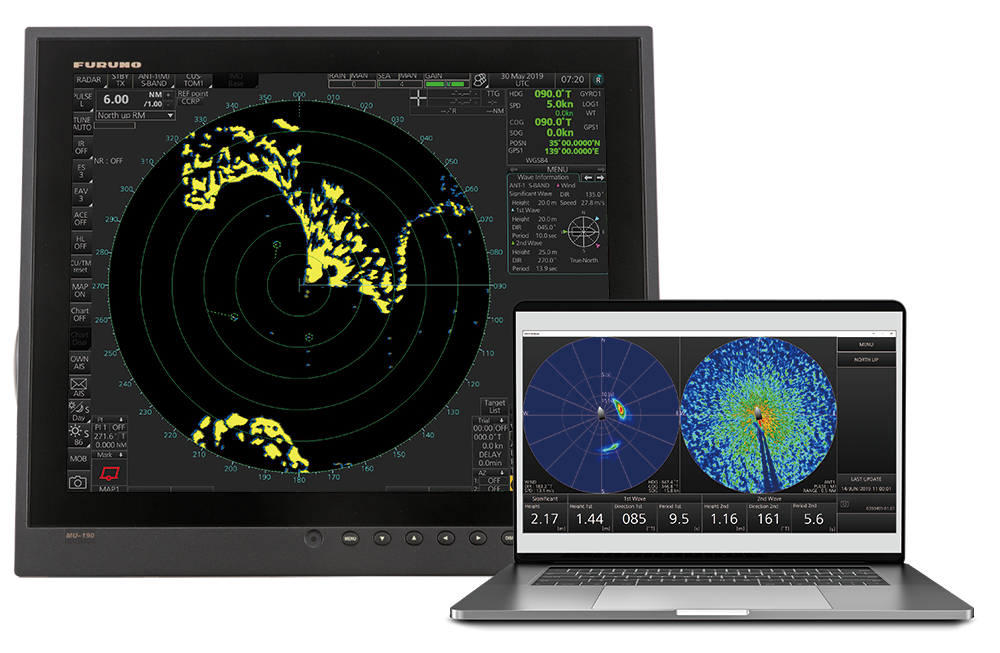 The Furuno WV100 software utilizes an automatic adjustment function, freeing the user from re-calibration if there is a change in sea state. WV100 software provides real-time data in both graphic and numeric formats. The Wave Spectrum Display uses a color range to indicate the relative intensity of waves, allowing the user to understand the situation at-a-glance. The Radar Echo Display shows the absolute intensity of the Radar's reflection from each wave using a 7-color spectrum. Data-sharing between ship and shore and between vessels allows for quick course adjustment and efficient traffic management around ports where monitoring of sea conditions is required.

Precise wave height measurement is critical for optimizing a safe and pleasant voyage for passengers and crew. Understanding wave action allows the navigator to set their course to avoid dangerous pitching and rolling, preventing or reducing damage to both ship and cargo due to inclement weather. Having accurate wave and current information in real-time is essential for offshore construction. The WV100 Wave Analyzer can be used with both X-Band and S-Band Radars, so when X-Band proves inefficient due to heavy rainfall, the system can easily switch to the S-Band Radar. Accurate wave data can be exported via serial transmission to an external compatible system, such as an automated weather reporting or dynamic positioning system.

Safety of life and of ships at sea is the most critical priority, and WV100 PC software provides the real-time analysis of sea conditions that aids skippers in making crucial decisions based on the most accurate information available. As a leader in marine electronics, Furuno is committed to providing efficient and reliable tools to ensure your safety at sea. For more information on Furuno's complete line of Marine Electronics, contact: Furuno USA, 4400 NW. Pacific Rim Blvd., Camas, WA 98607. Phone: (360) 834-9300.